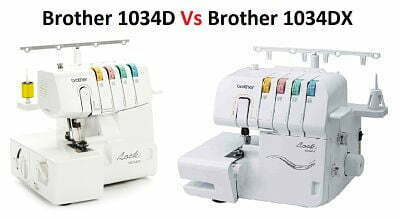 When two machines manufactured by the same company are rated 9.8 and 9.6 out of 10 by serging and sewing enthusiasts and professionals and industry reviewers, that’s impressive. When it happens more than once, it’s time to invest in one of them.

The Brother 1034D hit the market first and remains one of their best machines, in performance and sales. The 1034DX was released several years later with just enough design alterations to make it interesting and as useful and efficient as its predecessor. Choosing one or the other is the problem.

At first glance the machines look like twins, but anyone familiar with either model can immediately spot the differences, which are a combination of function and cosmetics. When it comes to overall quality and ease of use, either serger is an excellent choice, especially for entry-level users.

This difference may not seem major, but it can have a definite effect on how easy it is to use either machine. On the Brother 1034D, the differential feed and stitch length control dials are on the left side of the machine, while on the 1034DX, they’re on the right. Left handed users may tend to find the 1034D easier to use while right handed users may prefer the 1034DX.

Some Things Remain the Same

The main features and functions of both machines are nearly identical. Both include a differential feed, color-coded threading, 22 assorted stitch functions and can produce 1,300 stitches per minute. They’re both 3/4 thread, two-needle machines that offer superior stitch quality on a wide range of fabrics, including denim.

Both models include free phone support for the life of the machine and a 25-year limited warranty. Most importantly, both also offer a track record of reliability, durability and high-performance results.

When comparing both machines, it’s important to remember that it’s all about what’s more comfortable to operate. Some people can adapt to a machine that might not be as ergonomically suited to them as they might wish. With the Brother 1034D and 1034DX, there’s really no need to make adjustments in the way you prefer to work. Simply choose the one that suits you best. The good news is that if you’re left-handed, you might be in luck: the 1034D is typically priced at about $100 less than the 1034DX.

For many years, the Brother 1034D has been considered the point of reference against which all entry-level serging machines have been compared. Now, the Brother 1034DX is also on the market. It clearly possesses all the original’s outstanding qualities … and a few of its own.